Earlier this year I wrote a post on how I was preparing my twins for school. 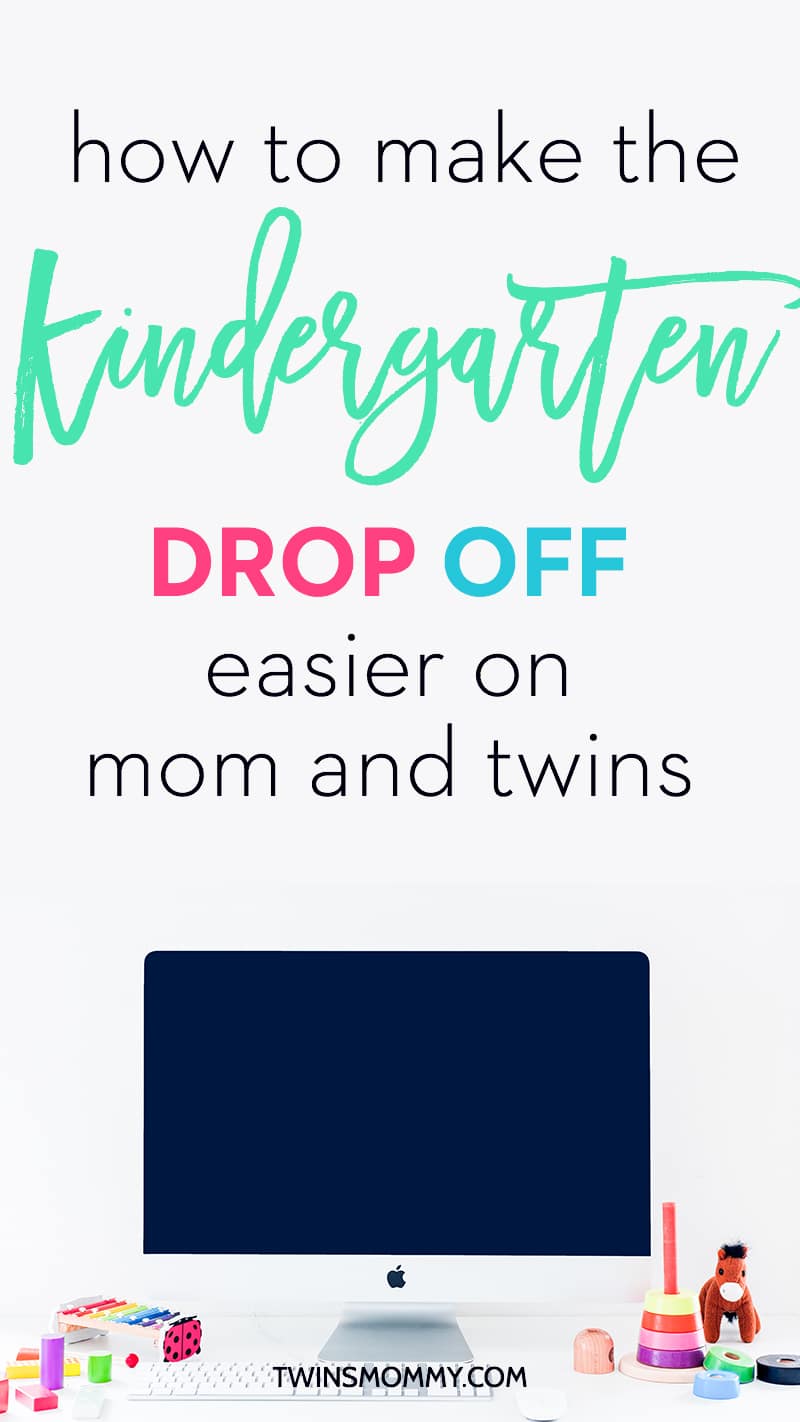 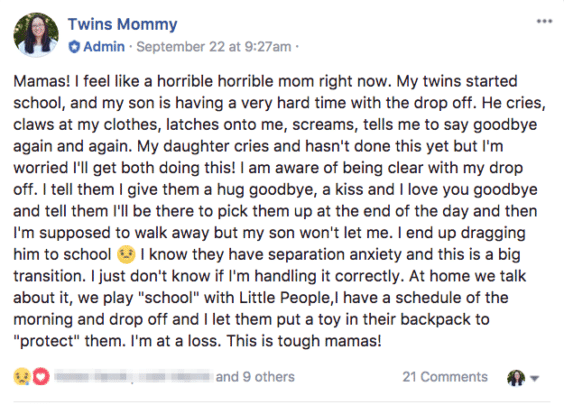 I needed to prepare myself for what was to come when I dropped them off.

If your little one is starting school or has already and you are struggling with the drop-off, here is what didn’t work and what did. And how the drop off is going now.

What I Did Leading Up to the Drop Off

Before the twins started school, we did some things to help them with this big transition. I know from their standpoint, this was a HUGE new thing for them.

They’ve never been away from me for more than an hour and if they were they were with their grandparents!

Needless to say, the process of removing myself and staying away at a safe distance was a long process.

This was totally new for them. So, in the summer and towards September, I began reading books about starting school. I’m not sure if this helped, but it opened up the conversation about school and what happens there and the feelings that come with it.

The books that we read:

And I’m sure there were other ones, but those stuck out and we read often.

Had a Gradual Entry Procedure

The school my twins go to has a gradual entry procedure for the first day of school for kindergartners. We were able to meet the kindergarten teacher last school year and in early September (once school started), we did a one-hour “interview” where we went to visit the classroom and I talked to the teacher about the twins.

The twins were able to play and be occupied while the teacher asked me about my twins’ strengths and struggles as well as the logistics of the gradual entry days. We also talked about having a home day for the twins. She was on board with that and suggested Wednesday’s.

The first day of school for my twins was September 11. There were only 3 kids that went that day (and two of them were mine!).

Every day, the teacher had a couple of kids come to do a full day. So September 11 was my twins day. The next school day was Sep 15 when the entire class comes to school.

During those two days, my twins were fine during the drop-off. Everything was still new and they were excited. Plus, the 15th was a Friday. So two days off and back to “regular” school days on Monday.

Monday Drop Off Was Horrible

I was battling them from the first wake up until I dropped them off. I was getting a lot of, “I don’t want to go to school.” Anxiety picked up too and I could see on their faces how scared they appeared.

So I did what any mom would do and hug them and reassured them every time they told me they didn’t want to go to school. I would also talk about school and try to get them used to school by…talking about it.

(I learned later that this was not a good strategy for my twins).

The grabbing, clawing, latching onto me and not letting me go. That was hard. I was a wreck the entire day at home.

Tuesday, my daughter was sick, so she stayed home and my son went to school. Looking back, I’m not sure if I should have let him go on his own.

This was the FIRST time EVER that he was away from his twin sister (save for sports activities, but mom or dad was always with him). He rebelled and was visible upset, but I was able to go into the “mud room” and say my goodbye there because we were late.

I also encouraged him to bring a stuffy. But the goodbye was upsetting for him and the teacher had to “rip” him off of me and I left.

Wednesday Was a Home Day

I was posting on Facebook in various mom groups about my challenge with the drop-off. I got some great tips. What I ended up doing on Wednesday was read a book called The Explosive Child.

It’s a great book for any child with behavior challenges.

Because you see, what I failed to mention was that my son was becoming increasingly aggressive towards his sister. Hitting and pushing her, taking her toys and trying to make her cry.

Wednesday I must have sat and talked to him 5 times about his behavior. They were both sick at this time so we did some outside play to get that energy out of him.

But I knew that this was normal – being an angel at school and devil at home.

Having a BA in Psychology and working extensively for over 10 years with children with autism doing Applied Behavior Analysis, I had to get down to the reason behind this behavior and work at that level.

But even having this experience behind me, I’m still a new mom and was crumbling inside.

And it was simple: school and being tired.

My son needs quality sleep of over 12 hours a night to be a happy and thriving child. My daughter, on the other hand, is fine with 10 hours.

But school is grueling. Having to “keep it together” the entire day is a challenge. And this happens for us too! Coming home from work, don’t you just want to unwind? But, you end up getting upset or irritable? It happens.

In The Explosive Child, the author talks about Plan B. This is the way to talk to children with behavior challenges. Instead of telling them what to do or how to fix the problem, you work with the child on creating a collaborative problem-solving strategy.

When the child is included, their behaviors go down since the whole process of doing Plan B works on a lot of lagging skills many of these children (and might I say adults too) lack.

But, with a 4-year-old? Talking it out and problem-solving?

Me: “I don’t like school. Why?” (this is reflective listening by answering what they say).

after him rolling around on his bed and pushing me with his feet he said,

I also talked to him about being scared at school (doing the same procedure) and he told me he’s scared because I’m not there with him.

So I’m happy that he vocalized his challenges.

Together we came up with some solutions:

Thursday was a sick day. Both stayed home.

During this time I played “mock-up school” with their Little People and Barbie. I also read more books about starting school.

Friday Was a Nightmare

Friday morning was a challenge. I got a lot of, “I don’t want to go to school.” I reminded them of the talk we had. I kept referring to the visual schedule.

The drop-off was challenging as my son continued to latch on to me. It was only when the bell rang that the EA was able to grab him from me (not sure why she couldn’t before?).

At this time I called the school to ask if I can talk to the teacher about some strategies to help me with the drop-off.

When I went to pick them up – they are always happy and adjusted at school. No crying is seen – I talked to the teacher briefly and she reminded me that this is all normal and to come back to this next week.

She did offer some tips like be quick and develop a routine.

What Ended Up Working

These last two days of school, the drop-off has been great! No crying and happy to go. What changed?

Over the weekend I did a pretend trial run of the drop-off. We got their backpacks and drove up to the school. My son had a difficult time wanting to go. But I assured him it was just pretend and that I would pretend to be a child and they could be mommy and daddy.

During that time we created a new goodbye:

The high-five is important. To end on this means that my son isn’t holding onto me. He can be on his own and give me a big high-five.

During our pretend trial run I told them that they can do this. I told them to scream it in the air and believe in it.

The other important new thing I stopped doing was no longer answering when I heard, “I don’t want to go to school.”

So when Monday rolled around and I heard the first, “I don’t want to go to school,” I simply ignored it.

Is It a Success?

While the last two days have been a smooth good-bye, I’m not counting my chickens yet! We have a home day tomorrow, so going back on Thursday may be a challenge.

Every day is a new day but I have to be strong for my twins. While I was a wreck, in the beginning, I’m also saying the same chant I told my twins: I Can Do This!

And you can too mamas!

Tell me in the comments what your strategies are for a tear-free drop-off! I’d love to hear them. 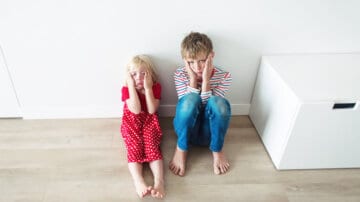 55 Things to Do When You’re Bored - Activities for Kids 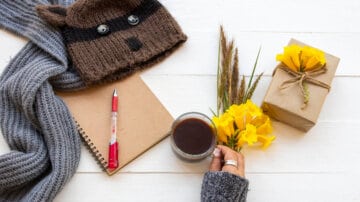 I'm Scared for My Twins

This resonates with me so much Elna! My son is 5 has been in half-day kindergarten all year. I am so happy to be at home right now so I can do the drop-off and pick ups for him. Afterschool is more challenging for us than drop off because he gets SO tired that he just wants to lay down and rest for a while..in fact he does that. He just lays face down in the snow from lack of motivation to walk to my car. It’s definitely frustrating, especially when I have a toddler in tow as well. Heres to Grade 1 being easier!Reply to Elizabeth

Oh, Elna, I am sorry the twins are having such a hard time! It breaks your heart, doesn’t it? My son has a very hard time leaving me as well. He is six now but I still hear “I don’t want to go to school!” a few mornings a week. He usually gets on the bus when it arrives with no issue but the feeling is still there. It sounds like you are working out a good routine and my only advice is to stick with it! A few months in and everyone will be adjusted.Reply to Emma

Hey Emma! Thanks so much for your encouragement. My son is still telling me he doesn’t want to go to school, but I have to remember to just ignore him and not “feed” into his worries. He adjusts faster and better this way. My daughter is doing a bit better and is actually saying she likes it!Reply to Elna

Great tips Elna! On my blog, I write about how to prepare children for school to help ease the transition. It is so important to find what strategies work well for your child, since all children are different. As moms we need to remember that school is usually the first time that children are expected to do so many things-sit still for periods of time, stay awoke & alert without a nap or rest, be around a crowd of children all day, and on top of that academically perform! Your twins will adjust to school soon, you’re doing a great job!Reply to Haji

Hi Haji, Thank you so much! Yes, understanding the expectations at school is important as it’s pretty new. I know my twins just are adjusting to being away from home and being away from me. They are slowly getting better.Reply to Elna